Matlock, originally known as Metesford, a name derived no doubt from the circumstances of being a ford across the Derwent where Matlock now stands, can boast a record in the pages of the Doomsday Book.

There is scant evidence of Catholicism in the Matlock area during the years immediately following the Reformation, although Hathersage and Hassop were more fortunate probably due to the presence of notable catholic families. It is thought Mass was celebrated on a regular basis in Matlock by a priest who travelled on horseback from Derby.

In 1880 a house in Holt Lane was rented and a Chapel opened on the first floor. The first Mass was celebrated there on April 23rd 1880.

During 1880 a site on Bank Road Matlock was bought. Building began to the design of a Mr E. Fryer an Architect from Derby. The construction was undertaken by the Matlock firm B. Askew at a cost of approximately £700.

On July 16th 1883 the Church of Our Lady and St. Joseph was opened in a ceremony attended by the Bishop of Nottingham. High Mass was celebrated and the choir from St. Mary’s in Derby sang Mozart’s Mass No. 1

The catholic population in Matlock and District at this time is not known but it is interesting to note that between the years 1880-1920 there were only two occasions when baptisms for any one year reached double figures. Indeed between 1887- 1895 no baptisms were recorded at all.

There are two main factors which might have influenced the sparse baptisms, one being that the majority of the congregation were over child-bearing age or unmarried, the other that the greater part of the congregation would consist of visitors to the then popular hydros, whose baptisims would have been recorded elsewhere. Whatever the cause, the indication is that the Catholic numbers were small compared within the indigenous local population.

For the first ten years the church was served from Saint Mary’s Derby, but in 1890 Father Robert Browne became the first resident Priest.

In 1884, a further piece of land had been secured for the purpose of a presbytery but the house was not completed until 12 years later, in September 1896.

Father George Le Roy, a native of Belgium came to the parish in 1895. It was he who was largely responsible for the success of the funding for the church in these early days. He used to appeal to visitors to Matlock to help pay the interest on the money borrowed for the church and presbytery buildings. This financial struggle continued up to and shortly after Father Le Roy’s death in 1920. A stained glass window is dedicated to the memory of Father Le Roy.

Father Charles Cossins came to Our Lady & Saint Joseph’s church in 1926. He was a dedicated priest. Parishioners spoke highly of his capacity for hard work in the parish.

The extension was made financially possible by the generosity of Mrs Wildsmith.

Father Cyril Restieaux (later Bishop of Plymouth) came to Matlock in 1934. Father Restieaux continued to improve the church building and its contents. He renewed the seating and had the main aisle tiled. He also installed Stations of the Cross. Three stained glass windows were put in and a new high altar and organ installed. The original wooden altar and organ were moved to Saint Theresa’s Church in Wirksworth.

Father Restieaux was parish priest for 12 years. He moved to Nottingham Cathedral in 1948.

Father John Goodwin came to the parish in 1948. It was his great desire to a build a school for the Catholic children of the parish. Although a piece of land was selected for the building project the number of children in the parish was too small to warrant the building of a new school. He died in 1965.

A special day for the parish and especially the Johnson family was February 23rd 1955. The then Bishop of Nottingham, The Right Reverend Dr. Edward Ellis, visited the church to baptise a sister for seven brothers. Bishop Ellis made a practice of travelling to any part of his diocese to baptise the eighth and subsequent children of Catholic families.

Father Hugh O’Brien succeeded Father Goodwin and came to the parish in 1965. Father O’Brien continued with the task of building a Parish Hall. He was successful and the hall was opened in 1967.
From 1969 to 1971 the parish was served by Canon Thornhill assisted by Father Michael Bell.

An important event in the church was the placing of a new Liturgical altar in 1969. The altar, made from Stancliffe Darley Dale Stone, was designed by Smith and Roper, Architects for the Sanctuary alterations. The altar was donated by the sons of Mary Katherine Smith, in memory of their mother who died on 5th June 1960. The relics of Saint Hedwig, taken from the original wooden altar, were subsequently embedded in the new altar by the Right Reverend James McGuinness, Bishop of Nottingham, on the 1st October 1978. In 1983 Saint Joseph’s Church celebrated its centenary. During this centenary year Father Anthony Colebrook became Parish Priest.

Farther Jonathan Cotton became Parish Priest in 1990. Father Cotton was ordained in 1976 and was assistant director at the Diocesan residential Youth Training Centre at the Briars, Crich, for four years before becoming Parish Priest at Matlock and Wirksworth.

On 6th September 1990 Saint Joseph’s School was opened. The Headmistress Sister Dolores Cooney a member of the Presentation Order, opened the school with 116 children. It was a very important and long awaited day by the Catholic Community in the Matlock area. The following year on 7th November 1991 the school was officially opened and blessed by Bishop James McGuinness. The school flourishes and presently has two hundred children enrolled.

In 1995 Father Jonathan was released from the parish and appointed the first full time director of the Nottingham Pilgrims working with Sister Angela Murphy a member of the Presentation Order.

Father Paul Newman came to Matlock in 1995. Father Paul was Assistant Vocations Director and Ecumenical Officer for North Derbyshire linking with other Christian churches. In 2000 he was transferred to Ripley and from there appointed Diocesan Youth Officer in residence at the Briars Residential Youth Centre, Crich.

Canon Bernard Needham succeeded Father Newman as parish priest in 2000. Work had just begun on demolishing the old parish hall and a fine replacement made possible by a grant from the Community Fund. The new hall was blessed by Bishop Malcolm McMahon, O.P., Bishop of Nottingham and officially opened by the Rt. Hon. Michael Martin, Speaker of the House of Commons on 7th September 2001.  Father Bernard retired in 2016 after serving 16years as  parish priest. 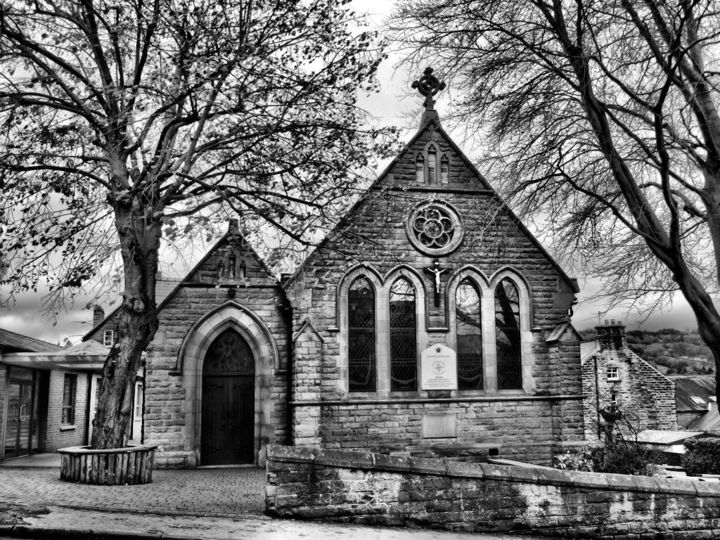 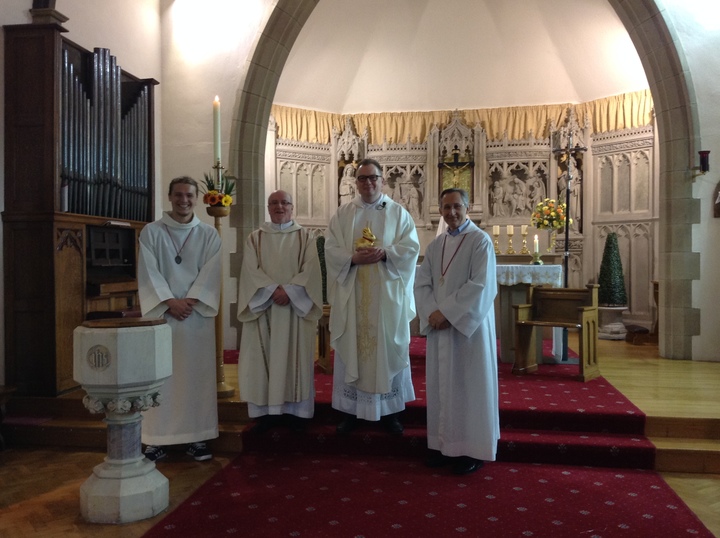